“Be yourself; everyone else is already taken.” ― Oscar Wilde

Born and raised in France, Brittany more specifically, I am a daughter, a mother of two beautiful boys, a companion to many, a lover, a dedicated yoga student and a RYT 500 yoga teacher living in Santa Cruz. 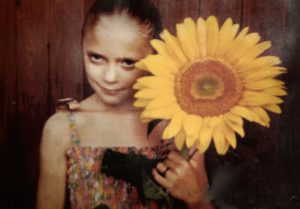 Corinne Marie-Jeanne Julienne Leblanc is my legal name, but I am also known as “Coco” since my dear french grandfather Jules named me so because I was reminding him of Coco Chanel, the French stylist. “Coco” stayed with me since then and the sound of it makes me happy. I am 10 years old in this picture, it was summer in France, and I still remember being mesmerized by the ethereal beauty of this very sunflower, my only one, unique sunflower. Did I waste enough time for it? Before stepping down the yogi path, I spent about 15 years of my life as a law student and a practicing lawyer, far from yoga.

I received a Law degree and a postgraduate degree (DEA Degree of in-Depth Studies) from the Université de Droit Paris II Panthéon-Assas, and a Masters’ Degree in International Legal Studies from Tulane Law School. Pursuant to the completion of the DEA thesis I wrote on the fiducie–sûreté, I started a scholarship under the guidance of François Terré, emeritus from Université de Droit Paris II Panthéon-Assas.  My research was about the “sacred” principle of the relativity of contracts under French law. As I began to dive deeper into the theory, philosophy, and spirit of this principle, accessorium sequitur principale became unavoidable and required of me to parallelly refine my elementary knowledge of Latin. During this period of passionate academic study was growing the drive to “taste” the practice of law, bite some dust, and I decided to pause my scholarship after about a year and try out my skills in the game of real life. However, one needs to be admitted to and attend a professional school to be allowed to take the Bar Exam in France. There I was, back to school! I studied for a year at L’Ecole de formation du Barreau de Paris and was eventually admitted to practice law in Paris, and later on in California when my personal life brought me to the United States. I spent several years working between Paris and the U.S. as a lawyer in international law offices.

Motherhood made me slow down, pause my hurried pace on the lawyer path, and reflect more profoundly on my life. Yoga came to me then, initially as a healthy way to maintain my sanity during this intense period of my life as a lawyer and a new mom in Paris. I was finding respite in the shalas, and letting myself get out of my buzzing brain. Yoga also surfaced to me as a renaissance, reviving my body, making it flow and bend with the strength and grace I had already experienced and explored deeply as a dancer and a gymnast during my childhood. This aspect of the practice was and remains today a source of joy to me at many different levels. Yoga was still emerging back then on the Parisian scene. I had to travel all across Paris, use several subway lines before stepping into the yoga studio that I had carefully picked because it was located right next to a very fine boulangerie-pâtisserie where I was indulging myself with a délicieux “Paris-Brest” after each yoga practice. However, long working hours at the law firm, then restless nights were often compromising my plans to practice at the studio on a regular basis. Oh, and how was I missing my after-practice indulgence! That’s when I started to develop a personal practice, learning from yoga literature, notably Light on Yoga  (B. K. S. Iyengar) and The Heart of Yoga (T. K. V. Desikachar ). I soon found another favorite pâtisserie close to our apartment located under the roofs of Paris 7e arrondissement, facing the Invalides and offering a peak on the Eiffel Tower, and this time I elected “le mille-feuille” as my new Péché Mignon,  and dove deeper into yoga.

Yoga became a more integral part of my life after our family moved to California. I had tried out many classes, mainly Ashtanga and Vinyasa, numerous teachers before I found Mark Stephens. I will forever thank my dear friend Suzana for dragging me to his studio on the other side of Santa Cruz, when I was only longing for a nap on a sunny California beach while passively observing my happy progeniture eat some sand. I fell in love with Mark Stephens’ yoga teaching. Mark’s teaching is genuine, intelligent and lighthearted.  I feel grateful I can continue to practice with him to this day in Santa Cruz.

Meanwhile, when not practicing yoga or trying out new recipes to satisfy my gourmandise (gravely distressed by the inexistence of a french boulangerie comme il faut  in Santa Cruz), I started volunteering and working at Tierra Pacifica Charter School in Santa Cruz, where my children still attend. I there taught French language and culture to primary schoolers for a few years, and I now principally help math students to embrace a growth mindset approach to their mathematical learning (I completed Jo Boaler’s mathematical mindsets training “How to Learn Math” and apply her curriculum in the classrooms). Soon, I connected the dots, finding passion for teaching yoga. After completing my initial teacher training with Mark Stephens, I began teaching at Toadal Fitness and West Cliff Yoga in Santa Cruz. I continue exploring and deepening my practice with him, other teachers and on my own. I most recently completed Mark Stephens’ advanced in-depth training and wrote a paper titled “Piano and Yoga”.

“Destiny itself is like a wonderful wide tapestry in which every thread is guided by an unspeakable tender hand, placed beside another thread and held and carried by a hundred others.” ― Rainer Maria Rilke

I have not felt very different appearing in court in my lawyer’s robe pleading a case, raising my boys, perfecting a Soufflé au Fromage, investigating math mysteries or stepping down a Shala as a student or teacher; they indistinguishably require of me to be faithful to ethics such as those infusing my yoga practice, among those, satya (truthfulness), abyasa (self-discipline, persistence), vairagya (detachment to outcome), svadhyaya (self-study).

Whichever hat I wear, nature, music, literature, family and friends, cats, earthly delights and love will accompany me along the path.

“The taste of milk and honey is not it. Love instead that which gave deliciousness.”
― Rumi